Seared tuna is a simple and delicious dish that only takes a few minutes to make. You can serve it simply with soy sauce as an appetizer, on a salad, or as a main course along with steamed rice or vegetables.

Tuna steaks are sold in most grocery stores as ahi or yellowfin tuna. You will sometimes see them marketed as sushi grade as well, although there is no official sushi grade designation. Tuna is actually graded using numbers with grade 1 being the highest. It's graded by taking a core sample and is based on appearance, color, size, texture, and fattiness. When buying your tuna look for a bright reddish pink color and avoid any grey-ish dull looking pieces. Typically tuna is served cooked rare so if it doesn't look like something you'd want to eat rare then it's probably best to keep looking.

How to prepare your tuna

Tuna is not a "fishy" flavored fish. It's very mild in flavor and has a dense but soft and tender texture. I typically season the tuna lightly to let the fresh flavor really shine through. It's also delicious marinated in soy sauce for around 10 minutes or fully encrusted in sesame seeds.

How to cook seared tuna

To cook the tuna heat a nonstick pan over medium high heat. When it's hot add around 1 tablespoon of oil to the pan. Then add the tuna and let cook for around 30 seconds to 1 minute on each side. It should be lightly browned on the top and bottom but still raw in the middle. You can quickly sear the edges as well if you like.

How to serve seared tuna

After cooking let the tuna rest for a few minutes before serving. You can serve the tuna steak whole, but you will often see them sliced very thinly and spread slightly to highlight the beautiful color of the fish.

Just make thin slices across the tuna steak and lay the first slice flat and then slightly overlap them one after the other. Serve along with a small bowl or ramekin of soy sauce. If you have mirin on hand I like to add a teaspoon to around 2 tablespoons of soy sauce for a slightly sweet and savory dipping sauce.

Other ways to serve tuna 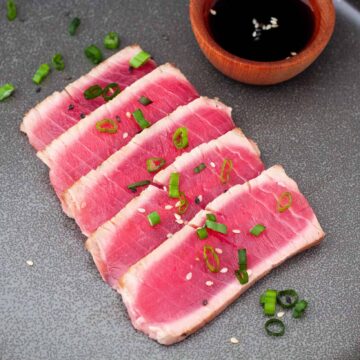