North Carolina BBQ Sauce is a tangy vinegar based sauce with a spicy kick from a blend of peppers. This barbecue sauce recipe is a Western NC style sauce that uses a cider vinegar base with ketchup and brown sugar to balance the flavors. It's amazing on pulled pork and all of your barbecue favorites!

There are two styles of sauce in North Carolina, with the capital city of Raleigh being the generally agreed dividing line. Both are vinegar based sauces.

In Eastern NC, the sauce is typically made with apple cider vinegar, crushed red pepper, cayenne pepper, black, pepper, and a little salt. Some also add hot sauce to the mix.

This recipe is for Western Carolina BBQ sauce, but you can leave out the ketchup and brown sugar to make a traditional Eastern Carolina style BBQ sauce.

For another Carolina BBQ sauce check out my Carolina Gold BBQ sauce. This South Carolina style sauce is a mustard based BBQ sauce that's tangy and savory.

Carolina style barbecue sauce typically uses apple cider vinegar as the base. You can also use white vinegar or a mix of the two if you prefer.

This barbecue sauce uses a blend of peppers and hot sauce and has a medium level of heat. If you prefer a milder sauce, leave out the cayenne pepper and hot sauce.

How to make NC BBQ Sauce

What to serve with Carolina BBQ Sauce

Carolina vinegar barbecue sauce is traditionally served on pulled or chopped pork. It's also tasty on ribs and chicken too.

The sauce is typically used in two ways. First as a mop sauce to flavor and add moisture to the meat as it cooks. The sauce is then served at the table as well.

When using Carolina BBQ sauce, I recommend basting the meat with the sauce every 30-45 minutes for the last few hours of cooking. It will not burn like sugary tomato based BBQ sauces, so you don't have to wait until the very end to add the sauce.

How to store barbecue sauce

Store leftovers in an airtight container and refrigerate for up to 1 month. Shake well before using to redistribute the spices that have settled.

Kansas City style sauce is a thick and sweet, tomato based sauce. While North Carolina BBQ sauce is thin and tangy, using a vinegar base. Carolina style sauce also tends to be spicer due the the prominent use of peppery spices.

This sauce has a medium level of heat as written. If you want more heat you can increase the amount of cayenne pepper, crushed red pepper, and hot sauce. 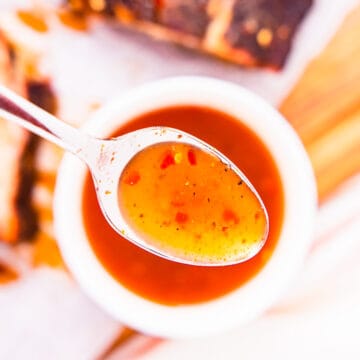