This quinoa Greek salad is one of my favorite salads. It's a twist on a classic Greek salad packed with veggies, olives, and feta cheese with the addition of quinoa and baby kale spring mix for a nutritional boost, all tossed in a red wine vinaigrette. It's a delicious light meal on its own or also great topped with chicken for a heartier option.

On Sunday's when I'm meal prepping for the week I like to make a big batch of quinoa. It's a great healthy alternative to rice as a side dish and easy to add into other dishes like protein bowls and salads like this one!

Quinoa is rich in fiber and contains twice the protein of rice with less calories and carbs, so it adds a ton of nutritional benefits to the classic greek salad.

I cook mine using the pasta method. First rinse the quinoa well to help remove the bitterness. Then add 1 cup of quinoa to a large pot of boiling water. Cook for about 10 to 12 minutes, then drain and return to the pot and cover. Let the covered quinoa sit off heat. This will allow the quinoa to steam to finish cooking and help avoid mushy quinoa. After around 5 to 10 minutes remove from the pot and refrigerate.

There are two ways you can start to prepare the salad and I can't decide which I like best, so I'll tell you both!

I think the first way is best when preparing a large salad for a crowd that you're putting into a serving bowl. If you're making one or two I think the second way is best.

The lettuce is really optional, add as much or as little as you like, and you could make this salad without it if you want.

Next add the chopped veggies and top with the feta and olives.

How to make red wine vinaigrette

To make the red wine vinaigrette add the olive oil, red wine vinegar, oregano, and dijon mustard to a bowl and whisk to combine. Then season with salt and pepper to taste. You can also use a jar or any other container with a lid and add all of the ingredients then close it up and shake well.

I'd recommend making the dressing at least 30 minutes ahead of time to allow the flavors to combine if possible. The dressing will keep in the refrigerator for several weeks.

Other Greek and Mediterranean recipes 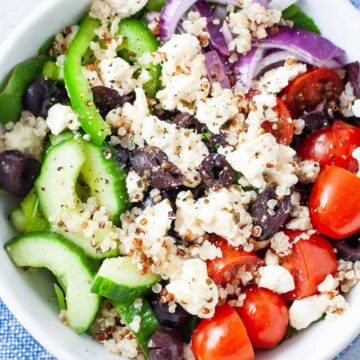