Standing rib roast is an impressive meal that will be the star of your holiday table. The flavorful herb and garlic rub makes a delicious crust and the reverse sear technique results in a perfectly cooked roast throughout.

Rib roast is the king of holiday meals. It's rich and fatty and loaded with beefy flavor. This recipe uses a flavorful garlic and herb rub to form a delicious savory crust on the outside.

And we'll use a reverse sear technique, which starts with a low and slow cook, and finishes with a quick sear at the end, to produce a tender juicy roast that's cooked evenly from edge to edge.

What cut is a rib roast?

The rib roast is taken from the back of the upper ribs of the cow. The whole cut is generally 7 ribs but these are often broken down into two smaller cuts called the first and second cut.

You'll want to ask your butcher for the "first cut". This comes from the loin end and will be less fatty, with a larger ribeye section. The second cut comes from the chuck end and is typically larger, but with more fat.

Many meat lovers consider the rich flavorful spinalis dorsi muscle, or ribeye "cap", to be the best part of the rib roast so look for one with a large cap. There is usually a fair amount of fat separating the cap which wraps around the meaty center ribeye.

What's the difference between prime rib and standing rib roast?

The rib roast is commonly known as "prime rib". Technically speaking "prime" refers to a grade of meat, not a cut, but most often meat labeled as a "prime rib" cut is choice grade.

You'll often see bone-in cuts labeled "standing rib roast" because the bones form a rack for the meat to stand on while cooking.

What to look for when buying a rib roast

When shopping for your roast plan on about ¾ pound of meat per person, or around 2 people per bone. Look look for a well marbled cut. That marbling will render out in the cooking process and baste the meat for a tender and flavorful roast.

You'll typically see choice grade beef in the supermarket, but some higher end stores and specialty butcher shops will carry prime grade, especially around the holidays. The marbling found in prime grade beef will produce a more tender and flavorful roast.

Some butchers pre-cut the bones away from the meat and tie the roast together. This recipe calls for adding herbs and a rub between the bones and meat so if this isn't already done you may want to ask your butcher to do that when buying.

While you're at it, you may also want to ask to have the roast "Frenched". This is where the fat and meat are scraped from the end of the bones. There's not usually much good meat there and it makes for an impressive presentation. Some supermarkets may not do that for you, but it's easy to do yourself with a good sharp knife.

How to prepare your meat for cooking

How to reverse sear rib roast

Cooking the meat low and slow allows you to cook the meat evenly edge to edge, without much of a grey, outer band. It's important to use a good thermometer when cooking a large roast. I recommend a digital leave in meat thermometer (affiliate link) so you can monitor the temperature precisely.

Cook the meat to the target cooking temperature below during the initial roast. The temperature will rise another 5-10 degrees while resting and another 5 degrees or so during the browning. Again, a digital meat thermometer (affiliate link) is a must so you can monitor the temperature precisely.

Note that the ends will be cooked a little more than the very center of the meat. Using this low and slow method helps avoid that to an extent, but a slight difference is unavoidable, especially in larger cuts.

What to serve with a rib roast

Serve with a horseradish cream sauce for dipping. The creamy spicy sauce cuts through the richness of the beef and is a delicious combo!

For sides serve up your favorite potatoes such as roasted garlic mashed potatoes, herb roasted potatoes or scalloped potatoes. My roasted Brussels sprouts with bacon go great with this as well for a green veggie option. For a super indulgent meal try serving with my creamy bacon mac and cheese! 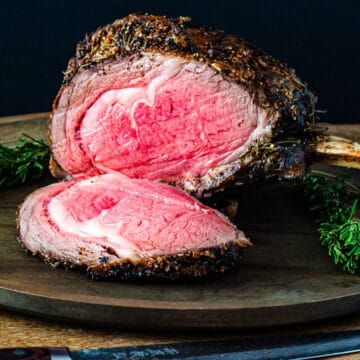