This Instant Pot London Broil is marinated in a savory sauce then pressure cooked to tender, juicy perfection, and topped with a delicious, silky smooth mushroom and onion gravy.

Why This Recipe Works

Cooking London Broil in an Instant Pot is a quick and easy way to prepare this tasty dish and is a great option for a weeknight meal. Toss it in the marinade in the morning, or the night before, and let it work its magic so it's ready to go at dinner time.

Just a quick 5-minute sear, a 3-minute pressure cook cycle, and a 10-minute natural release results in tender, juicy beef. Including the preheating time, the total cook time is around 30 minutes, so it gives you just enough time to whip up your favorite side dishes.

At the end, we will whip up a delicious mushroom and onion gravy using the liquids leftover from pressure cooking. The gravy is SO yummy and SO worth it!

This Instant Pot steak dinner with gravy is savory and satisfying and makes a perfect comfort food dinner on a busy weeknight.

What is London Broil?

London broil is a cooking technique where a large piece of beef is marinated, then broiled under high heat and served thinly sliced.

As the name implies it is most often made using an oven broiler, but can also be grilled. In this recipe, we'll make London Broil in a pressure cooker, for a quick and easy dinner with just one pot to clean.

See the recipe card at the bottom of this post for a full list of ingredients and measurements.

What Cut of Beef is London Broil?

Use a thick-cut top round steak for this pressure cooker London Broil recipe. Look for one at least 1½ inch thick, preferably thicker.

Beef labeled "London Broil" is typically top round beef and should work just fine, but you can ask the butcher what the actual cut is if you're not sure.

You can also use flank steak, but it is typically thinner, so you will need to reduce the cooking time down to zero minutes (yes, you can set your Instant Pot to zero!).

This London Broil marinade features umami-rich soy sauce and savory Worcestershire sauce, along with a punch of brightness and acidity from the lemon juice, which will also help tenderize the meat.

You can substitute red wine vinegar for lemon juice with similar results if you don't have a lemon on hand.

Note: this recipe was developed on a 6 qt Instant Pot Duo Evo Plus.

How to Make London Broil in an Instant Pot

How to Slice London Broil

Determine the direction of the grain of the meat fibers, then slice against the grain into thin slices, with a bit of an angle. This is the same cutting technique I use in my grilled flank steak recipe. Check out the photo there for a visual of this method.

Top round is a lean, hard-working muscle of the steer that can sometimes be tough no matter how perfectly you cook it.

Properly slicing the meat will help to make it more tender by cutting the long muscle fibers.

How to Make London Broil Gravy

This simple gravy is a delicious boost of flavor to this Instant Pot London Broil and Gravy recipe. It is optional, but it is definitely worth the extra 10 minutes!

What to Serve with London broil?

A starchy side dish is a must with any London Broil recipe, but especially this one, to soak up that luscious gravy! Mashed potatoes are a classic pairing with London Broil, or you can serve it with steamed rice for a no-fuss side dish.

I also like to serve a simply prepared green vegetable like my quick and easy garlic butter green beans or steamed broccoli with the dish. A simple kale salad is also a great option.

For a more indulgent option check out my cauliflower gratin!

Refrigerate leftovers in an airtight container for 3 to 4 days.

To reheat large portions, heat your oven to 300°F. Set the meat in a baking dish and bake until warmed through, around 10-15 minutes.

Reheat smaller portions in the microwave, at 30-second intervals until warmed through.

Can I make this recipe without an Instant Pot?

Yes, London broil is typically prepared by broiling in the oven so that will work too. Broil the meat for around 6-8 minutes per side until the meat reaches an internal temperature of 125-130°F for medium rare.

You can also grill London broil. Grill over high heat for about 5 minutes per side, flipping occasionally, until it reaches your desired doneness.

How long to marinate London broil?

You should marinate the meat for at least 2 hours, but preferably 6 hours or longer. I typically marinate it the night before I plan to cook it. The acid in the marinade will help tenderize the meat. Don't let it sit for more than 1-2 days though or it will affect the texture.

What temperature to cook London broil?

London broil can get very tough if not cooked properly since it's a very lean cut of meat. It's best not to cook it beyond an internal temperature of 140°F or medium doneness.

You can NEVER have too many recipes for weeknight dinners. Instant Pot recipes, 30-minute meals, sheet pan meals, and other quick options are a must for those days when you need something on the table quick. This London Broil in the Instant Pot is a great option and here are a few of my other favorites: 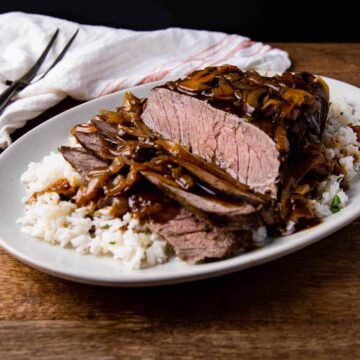 This recipe was developed in a 6-quart Instant Pot Duo Evo Plus.  You may need to adjust if using a different model.

I love using my Instant Pot for quick and easy meals. It's so versatile and clean-up is a breeze! Here are a few of my other favorites: