Everyone loves soft warm cinnamon rolls, but many people don't try making them at home because they are afraid of working with a yeast dough. This recipe will surely change your mind.

It's really easy to make and the results are outstanding! They're a perfect treat for a Sunday morning or when you have guests in town for the holidays.

How to make homemade cinnamon rolls

If you're not a regular baker working with yeast can be a little intimidating. But it's actually pretty easy to use. There are really two keys, first make sure you use fresh yeast. I don't bake bread all that often and yeast is really cheap so I usually just buy a new pack when I want to bake something If you have some in your cabinet just make sure to check the expiration date before you start.

The second key is to make sure your liquids aren't too hot. Brands vary so check the package, but usually around 110 degrees F is about right. This recipe calls for instant yeast so you don't even have to proof it. Just sprinkle it in the mixer and get going.

It's also important that your other ingredients are room temperature so that the yeast doesn't get thrown off course. For the eggs the quickest way is to put them in a glass of room lukewarm water for a few minutes before you use them.

Another part of making cinnamon rolls that can intimidate some people is kneading the dough. But fear not, this recipe is really forgiving and hand kneading is not required. If you have a stand mixer you can let it do all of the work with the dough hook and if you have a bread machine, it's even easier using the dough setting.

If you don't have a stand mixer or bread machine you can hand knead these as well. Just stir with a wooden spoon until you can't stir anymore, then scrape the dough out onto a floured surface and knead for around 5 minutes. Be careful not to add too much additional flour if kneading by hand. You want a soft and slightly sticky dough.

This recipe calls for two separate but short rises. First you'll let the dough rise in a greased bowl in a warm spot in your kitchen for around 30-45 minutes. To prepare the bowl I use cooking spray. Then I like to turn the oven on at 200 degrees for about 1 minute then turn it off and put the dough bowl in.

Look for the dough to roughly double in size. Check it around 30 minutes but don't get worried if it's not done, it normally takes a little longer. You just don't want to let it go too long or the dough will be too airy.

The second rise will be in the pan after you've rolled and cut the dough. More on that later.

I prefer the paste method. It's definitely a little more work to get it spread out on the dough but I think the results are better. Sometimes when you use the melted butter method the filling can leak out of your rolls while they bake.

If you do prefer the melted butter method and the filing leaks out, you can flip the pan over when removing them like you would with sticky buns so that the bottom becomes the top, then ice them as normal.

If you have a pastry mat this is a great time to get it out. Sprinkle the surface with flour and roll the dough out and aim for around a 24 by 15 rectangle to make 12 rolls. I usually make mine a bit smaller for the kids, so I go a little longer than that. The dough will be soft and slightly tacky so you will need to make sure the surface if floured and also sprinkle the top of your dough with flour but it should roll out easily.

Once you have the dough rolled out spread on your filling in an even coat to cover the dough and then beginning on the long end of the dough, roll it up tightly into a log.

To cut the rolls it's best to measure them out and use a very sharp knife. If you have them on a pastry mat that's marked it makes it really easy. If you can't measure them it's bet to halve the dough, into two sections, then halve those, etc. until you get them all cut. I wouldn't recommend starting at one end and eye balling them down the line.

After cutting the rolls put them into a greased 9 by 13 baking pan with a little room between them and let them rise again for around 30 minutes. If you want to make these ahead you can instead refrigerate them overnight. When you're ready to bake just remove and let them rise for around 1-2 hours until they're about to room temp then bake.

After the second rise put the pan into a 375 degree oven for around 15-20 minutes until the rolls are lightly golden brown and cooked through but still soft.

If you want really gooey cinnamon rolls you can pour a half a cup or so of warmed heavy cream or half and half over the rolls before you put them into the oven.

How to make cinnamon roll icing

I like to ice my cinnamon rolls with cream cheese frosting. To make the icing mix softened cream cheese and butter with vanilla and powdered sugar with a hand mixer or in a stand mixer. I like the icing to be fairly thick, but you can thin it with a tablespoon or two of milk if you prefer more of a glaze.

I like to let the rolls cool a bit before icing. This way the icing doesn't melt and stays thick. If you prefer the icing to melt and glaze the rolls, and get in all the crevices, go ahead and ice them a couple of minutes after you take them out of the oven. 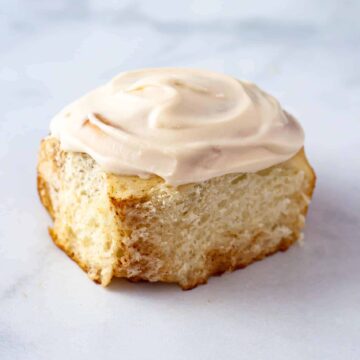 Check out my other breakfast recipes